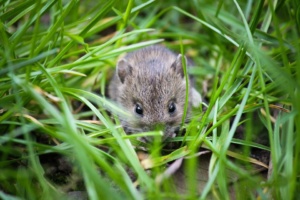 We are a mice rat exterminator Sacramento  provider removing and controlling rodents. Pest Control Pros will remove the mouse during the inspection. We seal up the exterior areas of your home or business so the mice will not get in again. Here is some information regarding mice.

House mice are small rodents with relatively large ears and small, black eyes. They weigh about 1/2 ounce and usually are light brownish to gray. An adult is about 5 to 7 inches long, including the 3- to 4-inch tail.

Droppings, fresh gnaw marks, and tracks indicate areas where mice are active. Mouse nests are made from finely shredded paper or other fibrous material, usually in sheltered locations. House mice have a characteristic musky odor that reveals their presence. Mice are active mostly at night, but they can be seen occasionally during daylight hours.

Because house mice are so small, they can gain entry into homes and other buildings much more easily than rats. As a result, house mouse infestations are probably 10 to 20 times more common than rat infestations. Effective control involves sanitation, exclusion, and population reduction. Sanitation and exclusion are preventive measures. When a mouse infestation already exists, some form of population reduction such as trapping or baiting is almost always necessary.

A key to successful long-term mouse control is limiting shelter and food sources wherever possible. Trapping works well, especially when a sufficient number of traps are placed in strategic locations. Trapping also can be used as a follow-up measure after a baiting program. When considering a baiting program, decide if the presence of dead mice will cause an odor or sanitation problem. If so, trapping may be the best approach. After removing mice, take steps to exclude them so that the problem doesn’t recur.

Several types of rodent are available, which can be purchased as ready-to-use baits that typically are labeled for use against only house mice, Norway rats (Rattus norvegicus), and roof rats (R. rattus). Because all rodent cides are toxic to humans, pets, and wildlife, take special precautions to prevent access to baits by children and non target animals.

Because mice can survive in very small areas with limited amounts of food and shelter, controlling them can be very challenging, especially in and around older structures. Most buildings in which food is stored, handled, or used will support house mice if the mice aren’t excluded, no matter how good the sanitation. While good sanitation seldom will completely control mice, poor sanitation is sure to attract them and will permit them to thrive in greater numbers. Pay particular attention to eliminating places where mice can find shelter. If they have few places to hide, rest, build nests, or rear their young, they can’t survive in large numbers.

Exclusion is the most successful and permanent form of house mouse control. Build them out by eliminating all gaps and openings larger than 1/4 inch. Stainless steel scouring pads make a good temporary plug. Seal cracks in building foundations and around openings for water pipes, vents, and utility cables with metal or concrete. Doors, windows, and screens should fit tightly. It may be necessary to cover the edges of doors and windows with metal to prevent gnawing. Plastic screening, rubber, vinyl, insulating foam, wood, and other materials are unsuitable for plugging holes used by mice.

Trapping is an effective method for controlling small numbers of house mice. Although time consuming, it’s the preferred method in homes, garages, and other structures where only a few mice are present. Trapping has several advantages as it doesn’t rely on potentially hazardous rodent cides, it permits the user to view his or her success, and it allows for disposing of trapped mice, thereby eliminating dead mouse odors that may result when poisoning is done within buildings.

Snap traps are effective and can be purchased in most hardware and grocery stores. The simple, wooden mouse-size snap trap is the least expensive option, but some people prefer the newer plastic, single-kill mouse traps because they are easier to set and clean. Snap traps with large plastic treadles are especially effective, but finding the best locations to set traps is often more important than what type of trap is used. Traps can be baited with a variety of foods; peanut butter is the most popular, because it is easy to use and very attractive to mice. Set the triggers lightly so the traps will spring easily.

Some dogs and cats will catch and kill mice and rats. There are few situations, however, in which they will sufficiently control rodent populations. Around most structures, mice can find many places to hide and rear their young out of the reach of such predators. Cats probably can’t eliminate existing mouse populations, but in some situations they may be able to prevent re-infestation once mice have been controlled. In urban and suburban areas, it’s common to find rodents living in close association with cats and dogs, relying on their food for nourishment. Mice frequently live beneath doghouses and soon learn they can feed on dog food when the dog is absent or asleep.

Pest Control Pros would be glad to catch a mouse or a rat that is disturbing your home or business. Contact us today to schedule a free estimate. Call (916) 378-5102