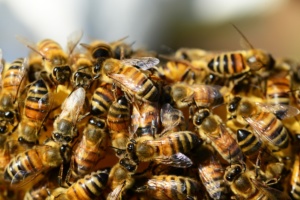 Bee Removal Sacramento Pros can be a very tedious job for any home or business owner. Pest Removal Pros will build a plan for your bee removal at a affordable cost. Below is some information regarding bees and how they can become dangerous.

Nearly everyone has been stung by an insect at one time or another. It’s an unpleasant experience that people hope not to repeat, but for most people the damage inflicted is only temporary pain. Only a very limited portion of the population—one to two people out of 1,000—is allergic or hypersensitive to bee or wasp stings. Although this publication is about stings from bees and wasps, the information pertains to stings from fire ants as well.

Stinging insects are limited to the order Hymenoptera, which includes wasps, bees, and ants. The stinger is a modified egg-laying apparatus, so only females can sting. Most hymenopterans live solitary lives, and their behavior is more likely to be flight than fight. Social hymenopterans—including yellowjackets, honey bees, bumble bees, and fire ants—have individuals in the colony whose task it is to defend the nest. If the nest is disturbed, these individuals will defend it vigorously. In addition, foraging members of the colony also will sting if they are disturbed or injured as they go about their activities. Some, such as the yellowjacket, are much more likely to attack than others.

The Africanized honey bee is closely related to the European honey bee, which is used in agriculture for crop pollination and honey production. The two types of bees look the same, and their behavior is similar in many respects. Neither is likely to sting when gathering nectar and pollen from flowers, but both will sting in defense if provoked.

Bees and wasps can be attracted to, or may react to, odors in the environment. It is best not to use perfume, cologne, or scented soaps if you are going into an area of bee and/or wasp activity. Unless someone accidentally collides quite hard with or swats at a bee or wasp, it is not likely to sting. Avoid going barefoot in vegetation, especially clover and blooming ground covers. Also avoid wearing brightly colored or patterned clothing. If you remain calm when a bee or wasp lands on your skin to inspect a smell or to get water if you are sweating heavily, the insect eventually will leave of its own accord. If you don’t want to wait for it to leave, gently and slowly brush it away with a piece of paper. When swimming in pools, watch out for bees or wasps trapped on the surface of the water. If you find bees or wasps in the water, it’s best to remove them to avoid being stung.

Stinging incidents often occur when nesting areas of social insects are disturbed. Be observant of the area around you. If you see insects flying to and from a particular place, avoid it. If you are going to be in an area where disturbing a nest is likely, wear long pants and a long-sleeved shirt. It might be a good idea to carry a military surplus, collapsible mosquito/gnat veil with you. Stinging insects often fly around the top of their targets. Because stings in the face can be disorienting, put on the veil, or pull a portion of your shirt over your head, and run away. Be sure that you can see where you are going. Insect repellent applied to your skin or clothing won’t deter these stinging insects.